. . .  “Two weeks later I’m on Penang Island, named after the betel nut so loved by many older men and women: all recognisable by their stained teeth and frequent spitting. It’s early in the morning: very early. Standing in the dawn light, at the colourful temple I’m unsure if I should go in. A few other tourists are also standing around, talking in low whispers, cameras around their necks.

It’s Thaipusam; a day of consecration to the Hindu deity Lord Murugen who is confusingly also called Lord Subramanian. Hindus who have made a vow to him carry frames decorated with coloured paper and flowers, fresh fruit and milk. When these tributes are placed at the feet of the deity, their penance or gratitude is accepted. Some 2000 people will carry the kavadi or silver milk containers, the 12 kilometres to the Natlukotai Temple in Waterfall Road, Penang Island on this annual pilgrimage. 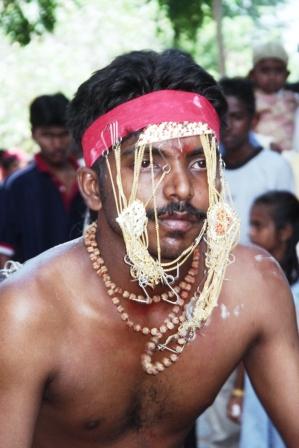 A young man arrives, he’s carrying coconuts, stands in front of the temple and mutters something then raising a coconut above his head he dashes it to the ground. The liquid mixes with the milk and shells of previously broken nuts and adds to the guillotine-like atmosphere. Twice more he smashes coconuts and, just as the last one breaks, a woman’s scream comes from inside the temple. My heart sinks. I can’t stand this I think, but almost against my will my bare feet are carrying me inside. The voyeur in me lifts my feet one step at a time, through the sticky mess. The colour and bright light contrasts with the pre-dawn gloom – my eyes feel assaulted. Everyone’s attention is focused on the front of the temple.

The screamer, a young woman, is crouched on one knee; a silver pot is being balanced on her head, the couple at her side help her to her feet. Unsteadily she shuffles past me, walking clock-wise around the interior of the temple. Her tongue protrudes, unable to retract into her mouth, held out like a ripe, swollen, purple-black avocado pierced with a trident shaped skewer. I feel sick. I hate intruding on what seems to be a private affair. She stops for a final obeisance to the statues before disappearing through the front door, the beginning of her long walk to the temple at the top of the waterfall and moments later, I too leave. Feeling nauseous, intrusive and my heart pounding with a beat that makes me gasp for air, I wonder how will I cope with following the devotees to the temple.

Later, watching many young men and women prepare for the trek i watch a young man. His handsome face seems full of joy as prayers are said prior to the piercing. As he kneels, a bucket of gold coloured water is poured over his body and orange muslin loincloth: he acknowledges his parents then turns to the piercer.

Adrenalin courses through my body as the piercing begins. I chant with the crowd. The call goes up with each piercing and I offer the one word prayer too. Vel.Vel.Vel. 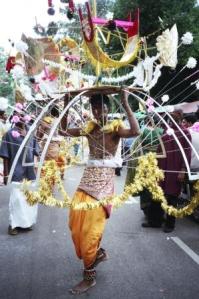 Incense and sweet oil smells fill the air and mingle with the heat, chanting and loud music. Along the route Kulwinder stops at the many, mostly temporary, roadside temples where he joins others as they dance, spin and kneel before the various deities. The streets are lined with people encouraging the devotees and the traffic, although chaotic, is tolerant. It’s midnight before we arrive at the Natlukotai Temple. For two hours, cramp has slowed Kulwinder and, as he struggles up the 262 steps leading to his goal, I leave him to have the hooks removed.

Exhausted, I return to the hostel, my mind crowded with images, sights, smells and emotions. As I lie on my bed I re-walk through the day in my mind.

The contrast between west and east is marked: most western religious events or services are characterised by quiet, private and non-commercial activities while Thaipusam is noisy, public and intense – in your face and exotic. The carnival atmosphere; saffron, violet and green clothes; gold jewellery adorning ears, noses and necks; the noise, the shaved heads of babies; the dancing; and the emotion have combined to ensure this festival’s well-imprinted on me.

This is an extract from Naked in Budapest: travels with a passionate nomad by Heather Hapeta ( available on Amazon (etc) for all ereaders

One thought on “Thaipusam .. piercing – on Penang Island, Malaysia”