I used to think my mother was so brave when, holding my hand, she stepped out into the middle of Colombo street to board the tram. I was excited and scared at the same time. A few years ago I took my mother on a tram trip – in the restaurant car: she was delighted with the silver service and delicious meal.

Seems my family history with trams goes back even further as I have a tattered photo of my maternal grandfather laying, or repairing, tram tracks in the mid-1930s: a photo that had appeared in the Christchurch Press. It’s only a few years ago that I always had an annual pass for the tram as, living in the inner-city I rode the tracks frequently – especially if it was raining or I was carrying my groceries and vegetables.

Trams removed were  from Christchurch’s streets in the mid-1950s, but returned in the mid-90s, mostly as a tourist attraction – back then, and during  my travels on this trip, even as a local I enjoyed hearing the history of places we passed. Unlike many places around the world,  taped commentary are played: here the drivers, or motormen as they are correctly called, speak freely about the city’s history and add their own personal touches. I hope this never changes as it makes these tours unique and personal. A travel writing friend of mine, Roy Sinclair, has been a tram driver here and provided historical context for the other drivers – he also tells me that the training is comprehensive.

It appears trams are simple vehicles, with a control to go, and a brake to stop, however, learning to drive them smoothly is not always easy, nevertheless it seems there are bonuses with the job. I recall one who used to recount his 15 minutes of fame when he co-starred with Kate Winslet in the 1990’s film Heavenly Creatures. As he said, ‘three days of work and I made it onto the film for about three and four seconds!

These motormen come from a range of backgrounds including; an economics professor, musicians, school principals, bank managers, and of course Roy Sinclair, an author.

On my most recent trip back to Christchurch (February 2016) I was a guest of Welcome Aboard with a combo ticket to travel on the tram, gondola, punting and the delightful, and informative Caterpillar Tour in the Botanic Gardens – all of which will appear in another blog. Now, let these photos tell the story of our trams. 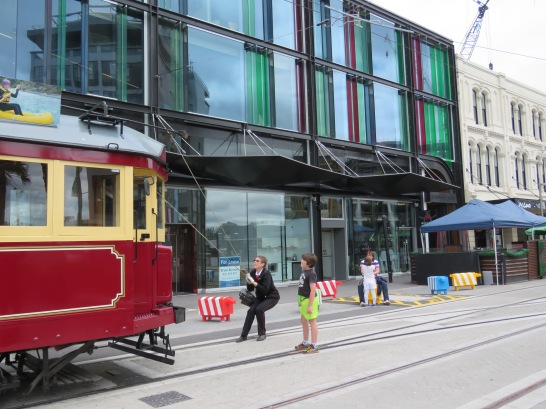 End of the line by the Strange’s building 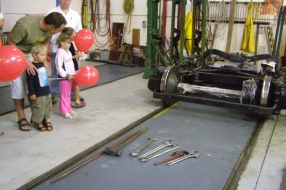 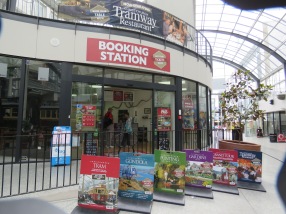 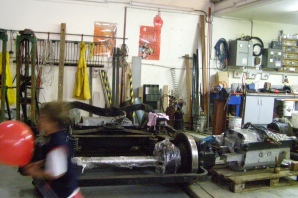 The workshop is pristine 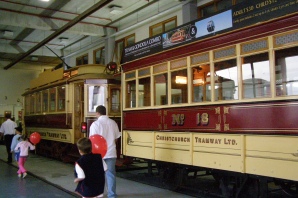 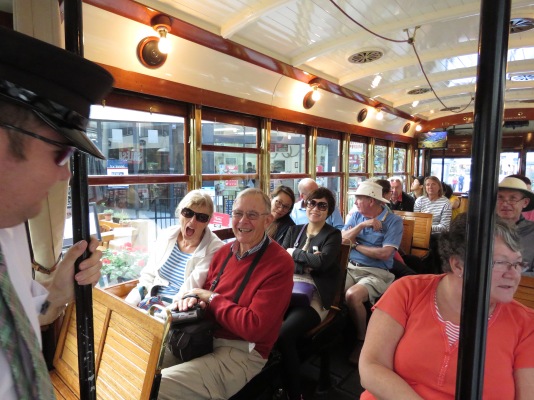 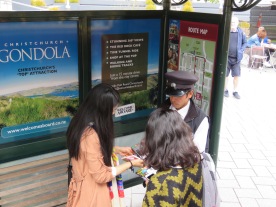 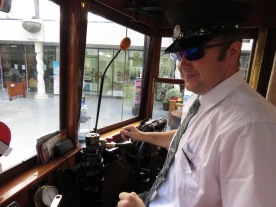 Motorman happy with his job 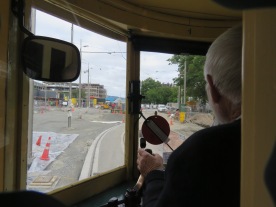 Slowly through the roadworks 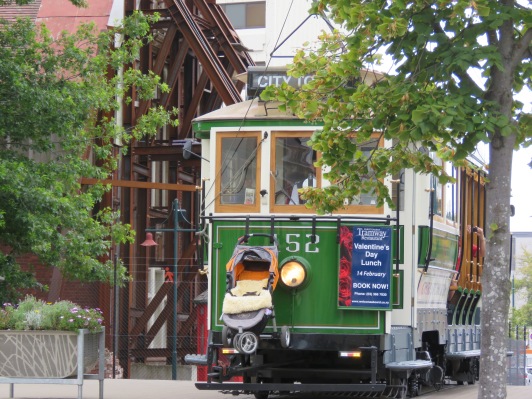 Prams and pushchairs travel on the front 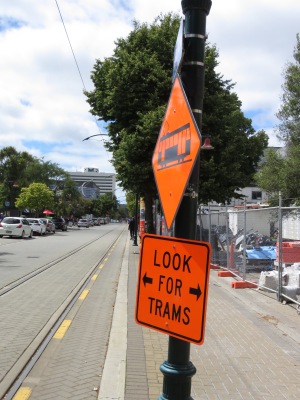 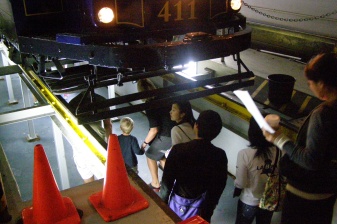 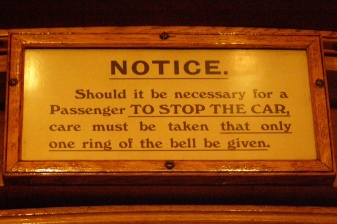 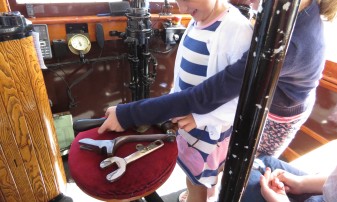 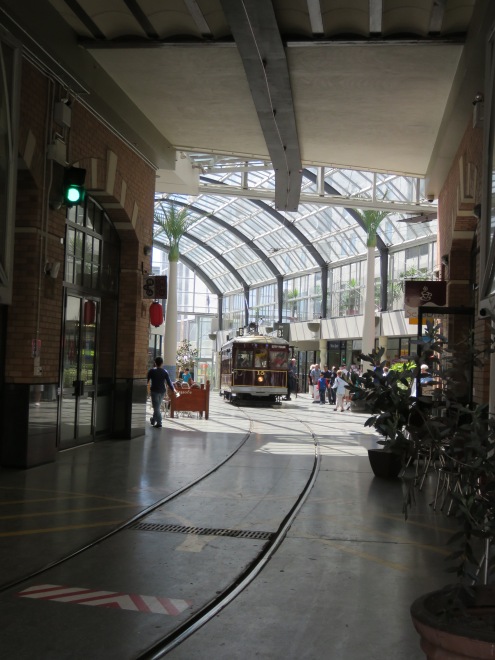 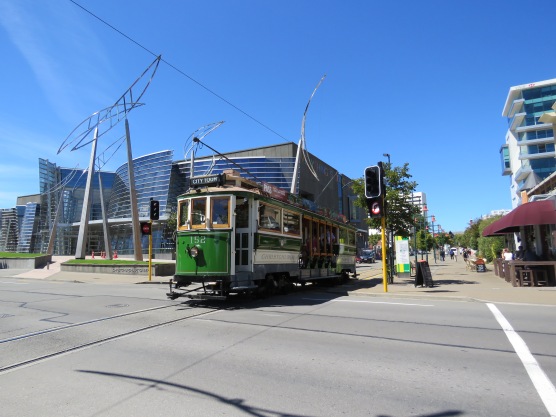 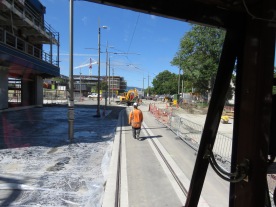 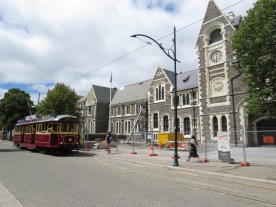 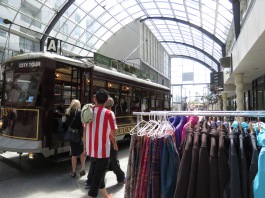 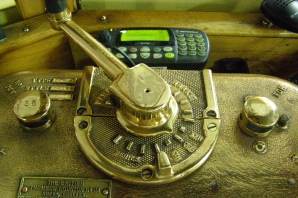 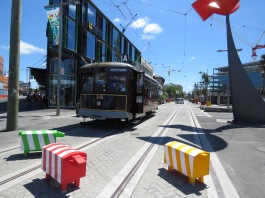 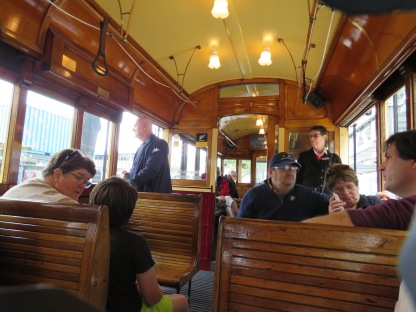 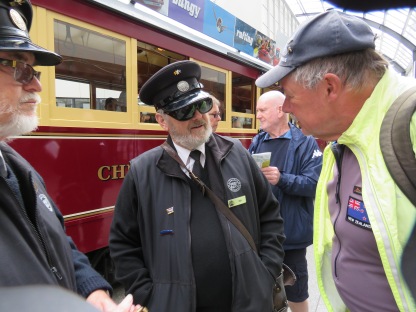 For some history about Christchurch trams see this library website