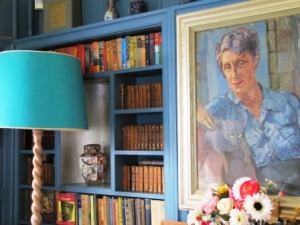 One of the worlds queens of crime, Dame Ngaio Marsh  was born in Christchurch, New Zealand and a while ago I wondered if her house had survived the quake: I’d assumed ‘yes’ given it’s wooden and is in a relatively unscathed part of my old city.

The “Ngaio Marsh house” suffered only minor damage during the  2010 /2011 quakes that rocked the city.  Sited on the lower Cashmere Hills meant the damage to the area was less than other places the city and Canterbury – a chimney had been demolished and the sewerage pipe was broken but repairs have been made to both.

Their website said “The house was well shaken, creating a considerable mess with small items and books widely distributed over the floor. However, nothing of special significance was lost apart from a few pieces from Ngaio’s glass collection.”

So, the house remains basically as it was and is still open to visitors – as are most things in Christchurch.  See what Wiki says about our beloved Christchurch treasure –  Dame Ngaio Marsh

I took these photos during my last visit to the house in May 2010 – my first visit was for a fairly wild party in the early ’80s – not long after her death!