“The Moeraki Boulders are huge spherical stones that are scattered over the sandy beaches, but they are not like ordinary round boulders that have been shaped by rivers and pounding seas. These boulders are classed as septarian concretions, and were formed in ancient sea floor sediments. They were created by a process similar to the formation of oyster pearls, where layers of material cover a central nucleus or core. For the oyster, this core is an irritating grain of sand. For the boulders, it was a fossil shell, bone fragment, or piece of wood. Lime minerals in the sea accumulated on the core over time, and the concretion grew into perfectly spherical shapes up to three metres in diameter.”

Maori legend says the boulders are remains of calabashes, kumaras and eel baskets that washed ashore after the legendary canoe, the Araiteuru was wrecked at nearby Matakaea (Shag Point).

Blue skies and a group of Australians were my companions when I joined the Red Rock Seal Tour in Wellington.

Leaving from the tourist information centre twice daily there is plenty to see on these tours including landmarks, seals and great views.

We wind our way through the Wellington (capital of New Zealand)  streets and within ten minutes we are having a wildlife experience on Wellingtons doorstep- this amazed the Aussies who expressed surprise that Wellington didn’t sprawl on for suburb after suburb until our tour-guide explained to how Wellington is constrained by the harbour.

On we went around the south coast of the North Island, through a disused quarry, past the flowering gorse-covered hills, on past the occasional fisher, scuba-divers and walkers and finally reach the red rocks. 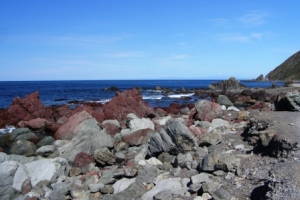 Science is not at all romantic and says the rocks are about 210 million years old and are made of iron oxide.

Legends are much more colourful. However they are also less definite and I was given one version to explain the rocks by John, another by an ex- Wellington resident, and the book The Great Harbour of Tara by G. Leslie Adkin gave me two more.

Legend 1 says it is the blood from Maui who used his own blood to bait the fish-hook when he caught the North Island (Te Ika a Maui)  During a phone call from London I was told “ No. It’s the blood from a high born young woman who threw herself off the cliffs because she couldn’t marry the man she loved as he was a commoner.”

Confused I went to the library and found these explanations. Pari whero (red cliffs) is where Kupe had his hand clamped by a live paua and it was his blood from that injury that stained the rocks. Story number four says it’s the blood from the two daughters of Kupe who gashed themselves in grief at their fathers long absence.

Which ever version is correct, the rocks are dramatic because of the small area they are confined to and their very different colour. Other interesting rocks in the area are the ‘pillow rocks’ which have been thrown up by an undersea volcano and the pushed-up-and-twisted rocks that have been formed by earthquakes around the Wellington region.

Also in this area are small caves where adzes and stone chisels have been found many years ago- before the base of the cliffs were covered. This whole area was raised up by a large earthquake in1855.

Continuing along the rocky coastline in the four-wheel-drive Landcruiser we start to see the NZ fur seals (kekeno) who hang out here in a bachelor-pad non-breeding colony – they leave their harem behind in the South Island to rear the young.

Some stay all year but most just winter over on this coast – so this tour continues all year.

Onto the main seal group we go, up a steep climb, through the Devils Gate then stop to admire the great pointy-snouted, small-eared mammals and have a cup of tea or coffee.

New Zealand fur seals love relaxing and mostly they ignored our photography session. Because they reach weights of some 200kgs and 1.8 metres in length I resisted the urge to pat their incredibly soft-looking fur which is grey-brown in colour, long and fine on top and very thick under-fur.

The trip is circular and after we leave the coastline and the view of the leaning light-house, we climb up the steep hill where we are told “we get a bit of a lean on here, but we should be right”. Most of us wimps preferred not to look too closely at the steep drop!

This part of the journey is via a private road that follows along the Wellington fault-line. From there we go past the Hawkins Hill radar station, which has a radius of about 400 kilometres, and looks like an ominous giant puffball from a distance. Not long after that we stop at the Wellington wind turbine generator for an impressive 360 degree view of Wellington and its environs before heading back to the city.

This trip was a great break from the city yet did not take all day to travel and left me free to visit Parliment gardens and buildings in the afternoon. Wellington is a wonderfully compact city and if you book ahead you too can ‘send yourself’ to our capital city for a reasonable cost.