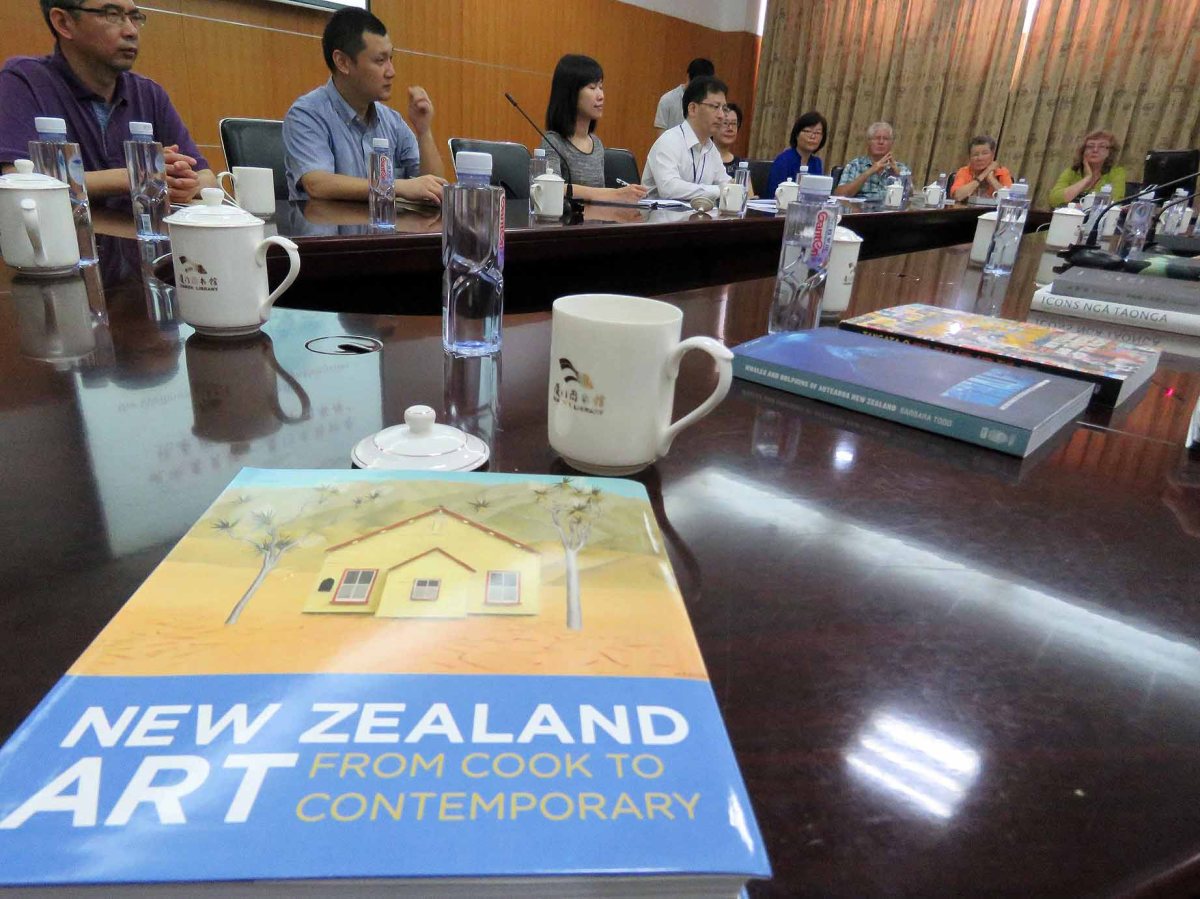 Fujian province, China, is unknown to most Western travellers but is the most famous and perhaps the most visited area for local tourism.

‘Secretive and reclusive’ were terms often used about China but things are changing.

You will know it’s home to chopsticks, calligraphy, acupuncture, the Silk Road, and Tiananmen Square, and of course the Chinese invented paper, printing, gunpowder and the umbrella.

Xiamen, the city by the sea, is at the mouth of the Nine Dragon River, and has frequently been labelled one of China’s most beautiful cities. It’s also been called a garden on the sea and is consistently named one of China’s most liveable cities, and was once called Amoy by Westerners. The climate is subtropical, and as it is on the coast and with very little heavy industry, and no coal for domestic heating, it’s here is cleaner than most Chinese cities.

During my week in the area we visited their amazing library which had originally been a foundry. It retains the huge features of such a building and has been converted amazingly.

Follow my footsteps on our trip via this slide show.

Te Papa Press is an award winning press so check them out.

NOTE: I travelled in this region as part of a cultural delegation from Xiamen’s sister city Wellington, New Zealand. See more here – http://www.wellingtonxiamen.com and check #Xiamen for photos on Instagram.

Today I had a date with myself, a day off as the sun was shining and the waterfront magic. I also visited Te Papa Tongarewa, NZ’s national museum and a must see for all visitors to Wellington, NZ.

One of the exhibitions I saw was Micheal Parekowhai’s “On First Looking into Chapman’s Homer” which was first shown at the 2011 Venice Biennale. As I have said in an earlier blog ,it is different in this setting to the one I saw in Christchurch (NZ) one because its inside, and the other is it’s the first time they have been shown together in one space – I believe he wanted the pieces even closer together but this was not possible because of the weight of the bronze! Note; this is only on show until 23rd September 2012

I liked it better in Christchurch – see those photos here. (what do you think?) 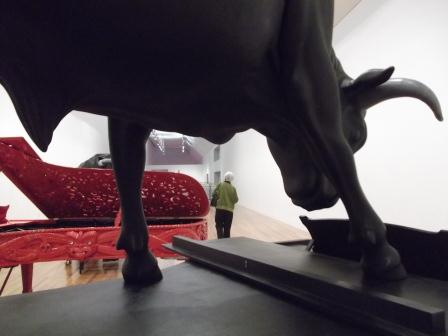 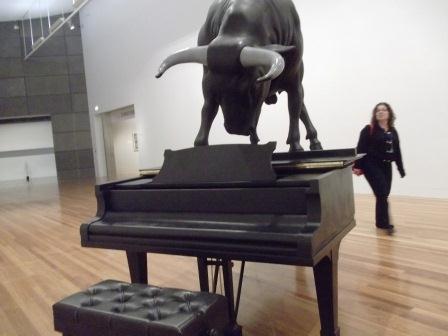 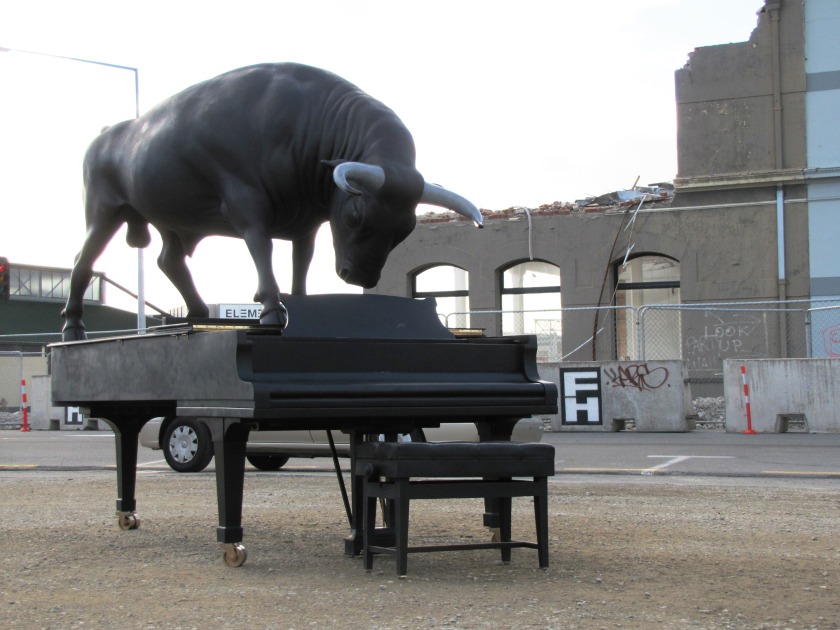 Travelling from the 2011 Venice Biennale, on to Paris, then Christchurch and now, Wellington, New Zealand is Michael Parekowhai ‘s installation On First Looking into Chapman’s Homer .

I saw the installation in Christchurch in June 2012 but will be sure to see it indoors here in my new city: I’m sure its surroundings make a difference.  When I saw it the bronze pianos and bulls were outside – in a patch of cleared rubble – there after buildings had been demolished following the city-destroying quake in February 2011. I loved the setting.  In Venice it was in a 15th century, Gothic palace.

Interestingly, or rather ironically, in Christchurch the piano, titled He Koreoro Purakau mo te Awanui o te Motu: story of a New Zealand river,  was inside a Christchurch  Art Gallery  “Outer Spaces”  space in the NG  building on Madras St.

This historic building, the old Bains warehouse, is one of very few left in the city after the quake and resulting demolitions in the inner city.  This repaired, safe building is scheduled to be demolished for a sports stadium: appalling cultural vandalism.

One of the world’s most popular arts publications has ranked Te Papa in its top 40 museums, above institutions like New York’s Guggenheim and the Getty Centre in Los Angeles.

The Art Newspaper, based in London, has just released its annual rankings of the world’s art museums. Te Papa’s 1.3 million visitors has earned it the 33rd highest visited in the world, and the highest ranked facility in Australasia. Exhibitions such as European Masters, Art from the Stadel Museum, E Tu Ake: Standing Strong and Brian Brake: Lens on the World attracted visitors from around the country and contributed to this success.

For more information about the rankings, go to http://www.theartnewspaper.com/

Te Papa, the museum of New Zealand, here in our capital city Wellington, has regular  floor talks that are well worth attending – many of them are free. Make sure you check the website to see what’s on while you’re in the city.

The most recent one I attended was to view (well actually, to view for the third time) the exhibition of Brian Brake‘s photography.

” Brian Brake (1927–1988) was New Zealand’s best known photographer from the 1960s to the 1980s. He first made his name as an international photojournalist, photographing for picture magazines such as Life, National Geographic and Paris Match.

His most famous work was on the monsoon rains in India in 1960. This essay yielded the widely reproduced Monsoon girl, an image of a young woman feeling with pleasure the first rains on her face.”