It seemed they have a love hate response to it and have a few, mostly derogatory, nicknames for it: they also told me although it was a ‘gift’ they paid for it! 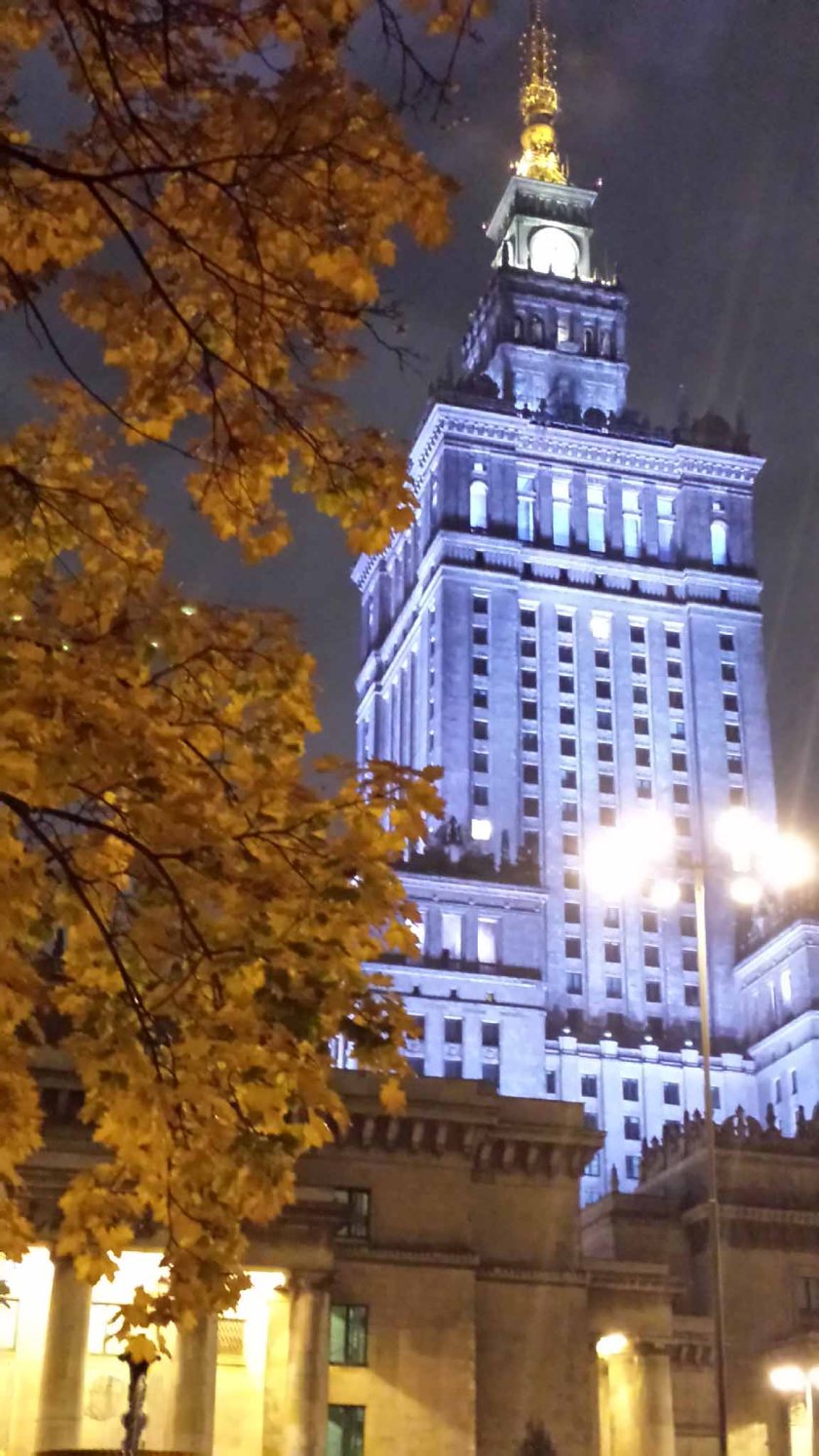 A beautiful building, it’s a mix of Socialist realism and Polish historicism and was apparently inspired by American art deco skyscrapers. Originally known as the Joseph Stalin Palace of Culture and Science but during a ‘de-stalinisation’ period, Stalin’s name was removed.

Wikipedia tells me “Construction started in 1952 and lasted until 1955. A gift from the Soviet Union to the people of Poland, the tower was constructed, using Soviet plans, almost entirely by 3500 workers from the Soviet Union, of whom 16 died in accidents during the construction.[2] The Soviet builders were housed at a new suburban complex complete at Poland’s expense with its own cinema, food court, community centre and swimming pool.[1][3] The architecture of the building is closely related to several similar skyscrapers built in the Soviet Union of the same era, most notably the Moscow State University. However, the main architect Lev Rudnev incorporated some Polish architectural details into the project by traveling around Poland and seeing the architecture.[2] The monumental walls are headed with pieces of masonry copied from Renaissance houses and palaces of Kraków and Zamość.[2]

As a travel writer, I was puzzled as I walked through the historic centre of Warsaw, Poland just a few weeks ago.  Why? Well, I’d read that during the Warsaw Uprising (August 1944) over 85% of Warsaw’s old centre was destroyed by Nazi troops, but my eyes could only see 13th to 20th century buildings.

Apparently after the war, a five-year reconstruction campaign began, resulting in the meticulous restoration of the Old Town which is what I could see.

According to the United Nations World Heritage website, “It is an outstanding example of a near-total reconstruction of a span of history covering the 13th to the 20th century.”

Beauty is in the eyes of the beholder as one of our clichés say, but for me, the beauty of European market places, churches and palaces is in their age.  I kept looking at buildings wondering is that rebuilt or is it old; five hundred years or fifty?  Actually, what I really was thinking ‘real or fake’; it felt Disney or Vegas-like. In fact, at the top of my mind was, ‘I’m so glad Christchurch is not doing that.’

Born, schooled, and living in Christchurch for most of my life, I have been devastated by the destruction of so many of our buildings, and much of my history. All my family arrived in Otautahi between 1862 and 1873 so our roots are deep in this flat, swampy, shaky region, and although I grieve for what was, I also welcome what will be.

During that fateful first quake (September 2010), lying in bed clutching my mattress so, if my 3rd floor apartment building collapsed I’d land on something soft, I had no idea what was to come. How relieved were my tweets and texts on that first day. It never entered my head we would eventually, like Warsaw, loose most of our inner city, my backyard. But we did – about 80% of our inner city.

And today I see on Facebook, that the beautiful Press building could be rebuilt, a replica on the same spot, for a hotel. That would be an asset to the city; it would give us back the appearance of still having one of our old buildings, but please make sure people know it’s a reproduction of a loved building. Don’t have tourists stand and wonder, real or fake, old or new?

Polish people are proud of how they defied the punishing German bombs by rebuilding exactly as it was, and the historic centre is full of tourists most of who love it as it is. However, for me, I’m just relieved my beloved Christchurch is, apart from key buildings that can thankfully be repaired, is arising as a new Christchurch: honouring the past, while welcoming the future.

(The Kiwi Travel Writer now lives in Wellington, but not as a quake survivor – she had begun apartment hunting some months before the quakes)