Weeki Wachee Springs is a very, very small ‘city’ with a population of 4. It’s also a Florida state park and ‘the world’s only city of live mermaids’ who perform in the Underwater Theatre which was built into the limestone of the spring in 1947.

When the curtains parted, the sun shone into the turquoise spring, and schools of small fish and turtles swam into view. Then, from some deeper part of the spring a mermaid swam up to the glass in a mermaid tail. Waving and smiling, she swam the entire width of the glass without appearing to need to breathe. However, at some 6 metres deep, the free-divers have air hoses to get their oxygen. I was amazed at how they used the hoses, which just float in the water in between them breathing from them, and I was anxious they would find them and get to breath. 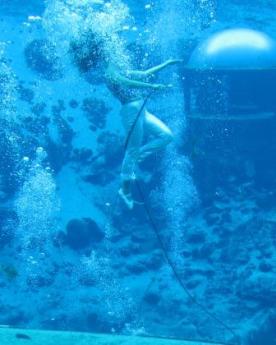 not all wore ‘tails’ .. see the air hose 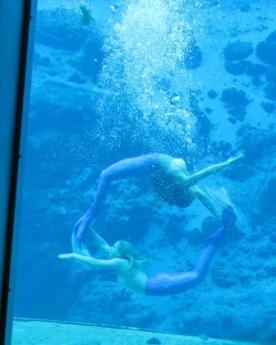 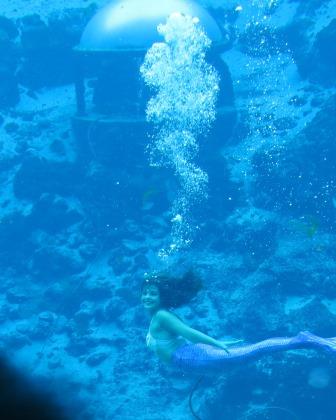 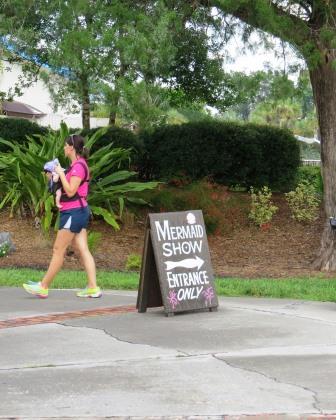 While I was a little dubious about visiting this attraction I found it fascinating about how it was done. I’m not a diver so this is not something I would ever try to do – especially when I find out they have to down a long pipe to get into the pool: I’d panic!

These are natural spring, some 50 metres deep, which feed the Weeki Wachee River, which pumps huge quantities of fresh water into the Gulf of Mexico daily. The state’s goal is to keep the spring and the river healthy, and I heard someone say ‘ it’s debatable how much the show helps environmental efforts’.

Mermaids are said to be aquatic creatures with the upper body of a female human and the tail of a fish – appearing in the myths worldwide. Sightings of them are now thought to have been sirenia (a biological order comprising dugongs and manatees) and the sightings by sailors were really encounters with these aquatic mammals. Although Christopher Columbus reported seeing mermaids while exploring the Caribbean so I may be wrong!

Mermaids of course have been a popular subject of art and literature in recent centuries – for instance Hans Christian Andersen’s 1837 fairy tale The Little Mermaid where a young mermaid falls in love with a human prince whom she saves from drowning when his ship was wrecked.  A world-famous statue, based on Andersen’s fairy tale, has been in Copenhagen, Denmark for over 100 years.

As well as watching the mermaid show, we also went on a short trip on the river with its extremely clear water. I believe canoes can be hired too. 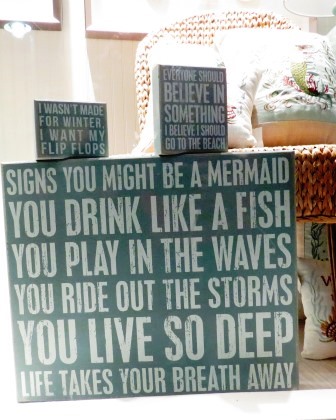